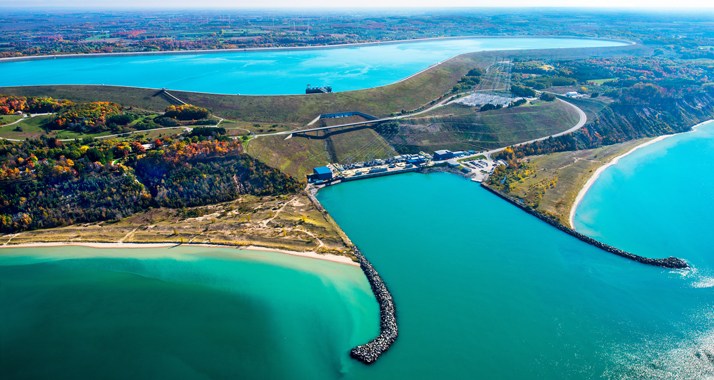 In 2011, Consumers off grid power and Detroit Edison announced the $800 million upgrade for the power plant, with plans to replace the six turbines with more efficient models. The project started in 2013, all six units should be back in service by spring 2020.

Completed in 1973, the 45-yeard old power plant stands on a sandy, dune-like bluff, high above Lake Michigan near Ludington. Its construction began in 1969 at $327 million.

Often compared to a storage battery, the power plant can be placed online at full capacity within minutes. The hydro-electric plant uses six reversible pump turbines that, at its peak, can produce 1, 872 megawatts.

When demand for electricity is higher, the water flows back down through the penstock during the day, turning the turbines that produce power. It is what enables the plant to respond quickly to the highs and lows of Michigan’s energy demand. At night, during off-peak hours, the turbines are reversed to pump water from Lake Michigan into the upper reservoir. 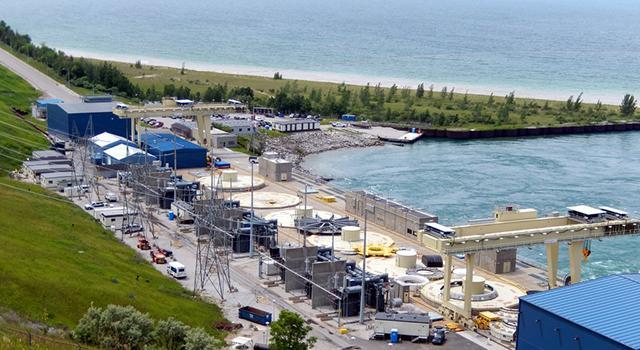 This 27 billion gallon reservoir, measuring to 2.5 miles long and a mile wide, has enough power to serve a community of 1.4 million residential customers.

In 2015, operating performance of the upgraded pump-turbine was measured during the performance test. It confirmed turbine efficiency performance against turbine output increased to a larger output range. In the case of pump operation, the pump discharge of the new runner increased by about 15% compared with the original at all head ranges.

The performance test carried out verified that Unit 1 has successfully achieved its target performance. Unit 1’s major overhaul was completed and turned to commercial operation test on March 12, 2015. Unit 2 was completed in May 2016.

A 2017 DTE Energy report outlined some of the major steps of the upgrade and its current status.

Using the latest technology to improve efficiency and pump cavitation performance and increase turbine output and pump discharge, the new pump-turbines for the Ludington plant were redesigned by Toshiba.

The manufacturing for the other units is in progress and barring any unforeseen issues.

The DTE Energy reports predicted that the upgrade is currently worth $806 million, which is $14 million lower than what the company’s board approved.